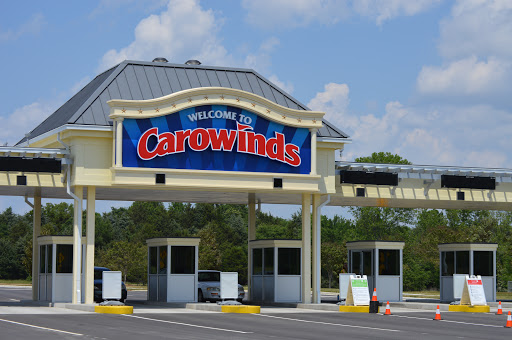 Carowinds was first announced on October 10, 1969, and was supposed to be a major resort with a theme park, hotels, a shopping centre, a golf course, and an NFL stadium. Carowinds is a portmanteau of Carolina and winds, in allusion to the winds that blow across the two states, and was conceived from the park’s initial concept of the history and culture of the Carolinas. The ground was broken on May 1, 1970, with an April 1972 opening date scheduled. The park was opened on March 31, 1973, after multiple building delays due to weather. The first season attracted over 1.2 million visitors, but the 1973 oil crisis limited attendance at Carowinds, and plans for the proposed resort were shelved. Despite decreasing attendance and growing debt, Hall and the other owners of the Carowinds Corporation continued to operate the theme park until early 1975, when it was sold to Taft Broadcasting.

Family Leisure Centers (a joint venture between Taft and Top Value Enterprises) had sold the company to Kings Entertainment Company, which was then sold to Paramount, Inc. With its Hanna-Barbera characters and other rides oriented at younger visitors, Taft Broadcasting breathed fresh life into the park. Scooby-Doo was Carowinds’ second roller coaster and first wooden coaster when it opened in 1975.Thunder Road, a Philadelphia Toboggan Coasters racing wooden coaster built by Curtis D. Summers, debuted at Carowinds in 1976. At a cost of $1.6 million, it was the largest and most expensive attraction created during Carowinds’ brief three-year existence. In 1976, White Lightnin’, a Schwarzkopf-designed shuttle roller coaster, debuted. Several flat rides were added to the park throughout the rest of the 1970s and 1980s. The Carolina Cyclone was built in 1980 and is the world’s first roller coaster with four inversions. Paramount Communications bought Kings Entertainment Company in 1992.
The term “paramount” was added to the park’s name in 1993, making it Paramount’s Carowinds. Many coasters, notably Action Theater (1993), Drop Zone: Stunt Tower (1996), and Top Gun: The Jet Coaster (now owned by Paramount Pictures), were based on Paramount Pictures films (1999). With a cost of $10.5 million, the addition of Top Gun: The Jet Coaster became the park’s single largest expenditure. Following the popularity of Flying Ace Aerial Chase at sister park Kings Island, Paramount opted to develop a replica at Carowinds, which debuted in the park’s children’s area in 2003. Nighthawk (formerly called as Stealth) was transported from California’s Great America and reopened as BORG Assimilator at the former Smurf Island location the following year.

The Dayton Daily News announced on January 27, 2006 that Paramount’s Carowinds and other parks in its Paramount Parks business would be sold by CBS Corporation (which split from Viacom at the end of 2005). Cedar Fair purchased Paramount Parks, which included Carowinds, on June 30, 2006.
Although Cedar Fair continued to utilise the Paramount’s Carowinds moniker for the rest of the 2006 season, the Paramount name was gradually phased out of press releases, the park website, and park signs. On the park’s website in January 2007, a new logo with the Cedar Fair emblem but no Paramount was unveiled. The new design featured the signature Cedar Fair flags flying on the Carowinds letter I. Similar improvements were made to the other four Paramount-branded parks that Cedar Fair acquired. After the 2006 season, Paramount was removed from all of the parks.
On August 26, 2013, Cedar Fair announced a three-year, $50 million expansion plan for Carowinds, beginning in 2014. A $30 million roller coaster, a $2.5 million water slide, a $7 million dining complex, and $4 million to renovate the park’s ticket booths and entrance areas were all included in the expansion.
Carowinds announced the arrival of Fury 325 for the 2015 season on August 21, 2014. The attraction, which was designed by Bolliger & Mabillard and debuted in the spring of 2015 as part of the park’s previously stated “top-to-bottom” expansion programme, is the world’s fifth-tallest roller coaster. For the 2015 season, a new front entry opened alongside Fury 325, replacing the park’s original North Gate entrance.Carowinds announced on August 27, 2015 that the water park, which was previously known as Boomerang Bay, would be enlarged and renamed Carolina Harbor in 2016. The Australian theme would be removed, and a Carolina harbour motif would be installed in its stead. A new six-slide complex, a new wave pool, and many additional splash areas for kids are also part of the extension.

Carowinds announced the addition of four new attractions to the County Fair section on August 18, 2016, including Electro-Spin (a Mondial top scan), Zephyr (Zierer Wave Swinger), Rock N Roller (Mack Rides Music Express), and Do-Si-Do (HUSS Troika). Carowinds also announced that Carolina Cobra would be rebuilt and renamed “The Flying Cobras” for the 2017 season. The Wings restaurant would also be refurbished, according to the announcement. Carowinds recently announced the revival of WinterFest, a Christmas festival that ran from November to December 2005.
Planet Snoopy, the park’s children’s area, was extended and converted to Camp Snoopy for the 2018 season, with the inclusion of six new children’s attractions.
Carowinds announced its largest investment in park history for the 2019 season on August 30, 2018. Copperhead Strike, a double-launched roller coaster made by Mack Rides, is the park’s 14th roller coaster and is located in the all-new seven-acre Blue Ridge Junction area. Whitewater Falls, Sand Dune Lagoon, and Thunder Road’s previous station were all located in the same location as Blue Ridge Junction. The 130-room SpringHill Suites by Marriott, Carowinds’ first on-site hotel, and Blue Ridge Country Kitchen, a new dining experience, are also part of the investment.
Carowinds stated in 2019 that the Boogie Board Racer, the Southeast’s longest mat racing slide, would open in Carolina Harbor in 2020.The Rip Roarin’ Rapids rollercoaster, as well as the Dinosaurs Alive! attraction, were both confirmed to be retiring.

As a result of the COVID-19 outbreak in the United States, Carowinds will not be open for normal operations for the 2020 season. However, from November 21 to December 20, 2020, the park presented a new holiday event dubbed “Taste of the Season.” Food, live entertainment, and other holiday activities were available throughout the park, as well as a limited number of amusement rides. In May 2021, the park reopened to the public.

On busier days or during road construction, consider taking alternative routes upon exiting the park to alleviate traffic delays.

If you’re exiting the park and wish to travel on I-77 North towards Charlotte or the I-485 outer loop, consider taking Westinghouse Blvd to exit 1A or Steele Creek Rd to the I-485 outerloop.

Directions to Westinghouse Blvd Exit 1A

Directions to I-485 via Steele Creek Rd

If you’re exiting the park and wish to travel on I-77 South towards Columbia, consider taking Pleasant Road to Exit 88 to I-77 South.

Carowinds
14523 Carowinds Blvd, Charlotte, NC 28273, United States
Head northeast on Avenue of the Carolinas toward Cabelas Dr
0.3 mi
Sharp left to stay on Avenue of the Carolinas
0.3 mi
Use any lane to turn left onto Carowinds Blvd
0.2 mi
Use the right lane to merge onto I-77 S via the ramp to Columbia
2.3 mi
Take exit 88 to merge onto SC-460
0.4 mi

Next Point of Interest